As the country’s growing acceptance of marijuana continues to spread across state lines, it should come as no surprise that Americans are now more likely than ever to support legal weed. In fact, a new Gallup poll reveals that they’re more likely to support it now than at any point in the previous five decades, with seven in 10 Americans vouching for the drug’s legalization.

The poll found that 68% of U.S. adults are in support of legal marijuana:

The 68% of U.S. adults who currently back the measure is not statistically different from last year’s 66%; however, it is nominally Gallup’s highest reading, exceeding the 64% to 66% range seen from 2017 to 2019.

Data was collected between September 30 and October 15, right before the national elections, where voters approved all of the proposals to legalize marijuana put before them across the U.S., showing how much people’s perceptions have changed all over the country.

RELATED: Survey Shows 75% Of Veterans Are Interested In Cannabis

The poll indicates that the majority of people are for marijuana legalization, no matter their age, gender, race or education. All in all though, young people, college graduates, men, and those with incomes of at least $100,000 are more likely to favor legalization. 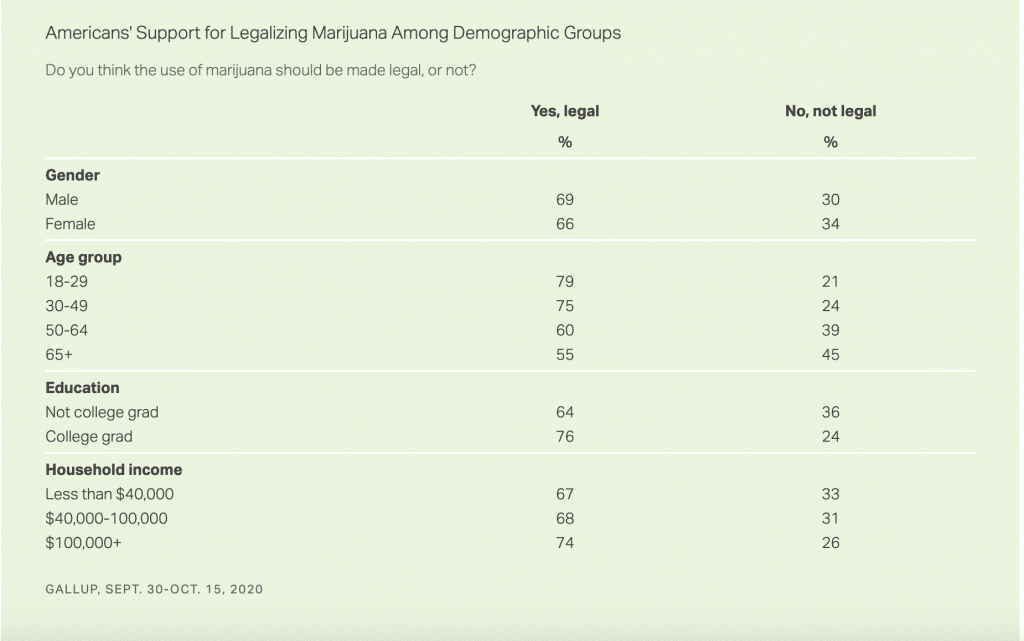 Politics play an important role. Democrats and Independents are more likely to support legal marijuana over Conservatives and Republicans, which remain the groups that are least likely to support the measure (about half of them offered their support in the polls). 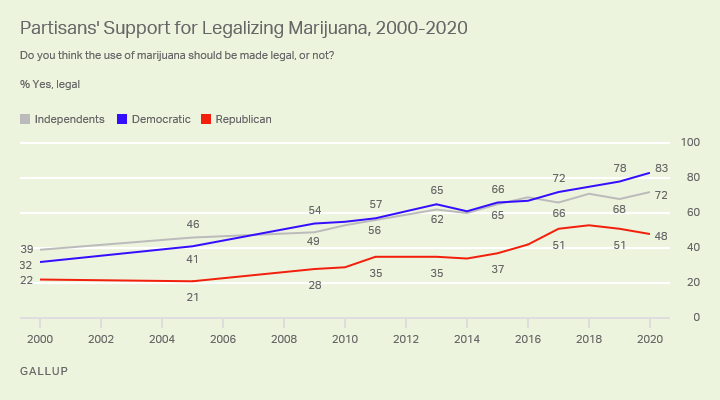 Religious people are also less likely to support the legalization of the drug, with the frequency of church attendance playing a key factor. Per Gallup: “A slim majority of those who say they attend weekly oppose legalization. Yet, about three in five of those who attend nearly weekly or monthly, and about four in five who attend less frequently, favor legalizing marijuana.”

Support for marijuana grows with each passing year. This change is reflected in people’s mindsets, conversations, and state laws. It’s only a matter of time before we see it on a federal level.