There was a time when the term “stoner” was both considered an “offense” and a badge of honor. Those who didn’t smoke cannabis thought calling someone who did smoke cannabis a “stoner” was a bad thing, when in reality – that’s just how stoners talk to each other braj!

Nonetheless, the demonization of cannabis consumers created a sub culture that is rich with rituals, rules and values. Things like “Always smoke a friend out” is something that any true stoner lives by. What this means is that if you have a friend that doesn’t have weed, you won’t ever “give him or her weed” but you’d rather “smoke’m out”. It’s customary for them to keep the roach of the session.

Of course, the stoner culture is as nuanced as the people who smoke weed – and if you haven’t noticed lately it seems that everyone and your grandmother is smoking cannabis these days.

One of the more known “stoner rituals” on the books is the Wake and Bake, which is something that I continue to do till this very day.

Today we’ll be talking a bit more about the mighty wake and bake. We’ll take a look at why do it, when it can become a problem and wake and bake best practices.

What exactly is a Wake and Bake?

While the seasoned stoner may scoff at the notion of not knowing what a “Wake and Bake” could be, I would like to remind you that at one point in time, we were all noobs.

A Wake and Bake essentially is the act of smoking weed right after waking up. To fully experience a wake and bake, you’d essentially open your eyes, reach for a bong or a joint and take a hit.

However, I personally like to make some coffee and prepare a spot for me to relax and reflect on my morning toke. The wake and bake doesn’t necessarily need to be the first thing you do after opening you eyes, except if you’re a purist.

Rather, the Wake and Bake is the first smoke you do before anything major in the morning. For example, you can wake up, go to the bathroom, make some coffee and even prepare some toast and smoking after that would technically still be a “wake and bake”.

However, the more time passes from when you wake up to when you first smoke will drastically change the definition. I would say at most you have about 30-mins before a Wake and Bake turns into something else.

Why Wake and Bake?

The first time I “Waked and Baked” I was a teenager who only wanted to get high as balls. I had a bunch of weed at my disposal and waking and baking was pretty much just ‘what we did’. After a decade of consumption I altered my habits and now only wake and bake very mildly in the morning.

My job permits it. However, I don’t wake and bake if I have important shit to get done.

The benefit of the wake and bake is that it’s the “purest high” in that you’re not contaminated by any one else’s bullshit. The wake and bake typically is a solo venture but it can also be done in groups.

A wake and bake just slows you down a beat in the morning, allowing you some time to yourself – to collect yourself and get ready for whatever the world may hurl at you today.

When Waking and Baking Becomes a Problem

There’s degrees of consumption. Typically, you don’t want to start off your day with 3 large bong hits of cannabis if you’ve got pressing tasks that need completion. However, a hit or two from a small pipe of some smoking sativa – those tasks could be completed in no time.

However – some people can overdo the wake and bake which will spiral them into a couch lock. This is the tricky part of smoking weed so early in the morning. If you smoke enough, you’ll kick start your nervous system – it’s a sudden reboot where you can feel the “tired” fall off you.

However, smoke too much and the refreshing high turns into a, “let’s not get out of bed and munch on some food and catch up on all the unimportant binging in the “watch later” folder”.

As mentioned, knowing ‘when’ to wake and bake become more important the more shit you have going in your life.

Listen to your own body

You’ll know when enough is enough. I subscribe to the idea that every person is the wisest when it comes to their own body and their own limits. Simply be aware of your own and you’ll always have a good time with this sacred stoner ritual.

I still wake and bake most days. Sure, it’s a bowl or two from a small pipe – but it’s enough to switch me from “hibernate” to “ready to kick some butt”.

What’s your morning Wake and Bake Ritual look like?

READ MORE ABOUT HOW TO WAKE AND BAKE… 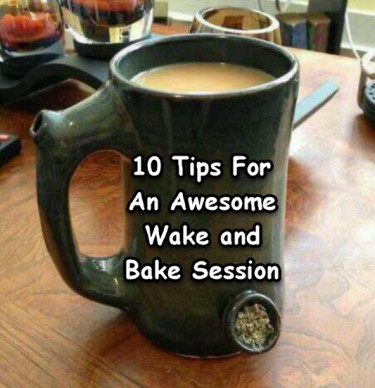 TIPS FOR WAKING AND BAKING, WHAT SHOULD YOU DO FIRST? 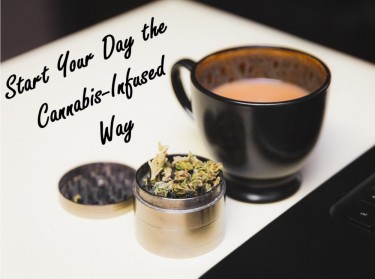 WHY A CANNABIS-INFUSED BREAKFAST WITH COFFEE IS GOOD FOR YOU!